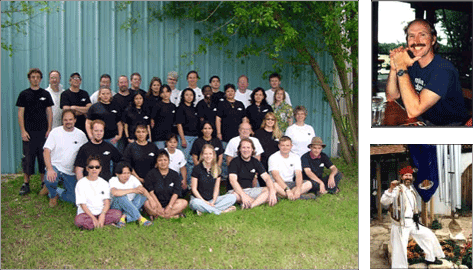 Our founder, Larry Roark died tragically in a car accident on March 6, 2001. He had graduated from North Texas State University cum laude with a degree in music theory in and also performed graduate work. After he served on the staff of the Texas Women's University performing stage lighting and then played the euphonium with the Clyde Beatty-Cole Brothers Circus Band for several seasons. A consummate musician, Larry played with many other groups including the Austin Symphony, the Creative Opportunity Orchestra, the Austin Klezmorim, the , and the First Baptist Church voice and handbell choirs. Larry also served as a host of Austin Texas' KUT, Austin Texas' NPR affiliate, Radio's Overnight show for several years and then continued thereafter to guest host. Please see KUT Radio's tribute for more information on Larry's years on the air.

Larry was a truly kind and gentle man with a passion for beauty and spirituality which he expressed through music and art photography. At Music of the Inc., Larry's vision was simply to make the most durable chimes of the highest acoustic quality possible; "the of windchimes®". The tremendous outpouring of letters of appreciation, demand and intense customer loyalty over the years confirms Larry's achievement. Through his many years of working shows, fairs and festivals he felt his customer's appreciation directly. He worked to please his customers and himself. His vision of "world peace - one backyard at a time®" was genuine and heartfelt.

Please enter the following information. If you are shipping to multiple addresses, select other and enter the person's first name and first initial of their last name. You will have the ability to enter their address and information on checkout.

Your item was successfully added to your cart.